Bridgers keen to fire against Blazey 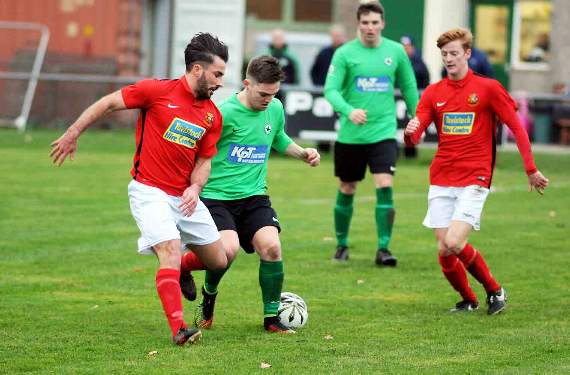 Ivybridge Town's James Rowe battles for the ball against Tavistock

Blazey sit one place below Ivybridge in the table at 19th, but have picked up just four points all season.

With Ivybridge’s performances improving immeasurably from the dire start to the season, they are keen to leave the lower reaches of the table behind, and a win tomorrow would be a good start to achieving that aim.

Howard said: ‘It’s an important game for us and nothing less than three points will be acceptable, to be honest. We’ve got a full squad to pick from, apart from Joe Truelove, which is a very different situation to last week.’

An understrength Bridgers side lost an exciting encounter last weekend against league leaders Tavistock, but were far from disgraced in a game the visitors won 5-2.

Howard was pleased with his side’s efforts in a game where he felt the final scoreline flattered the visitors. He said: ‘I was encouraged by our performance on Saturday, the scoreline didn’t really reflect the game.

‘We had seven players missing, so we put in four second XI players and two U18s and the effort was really good.’

Tavistock began the game well and opened the scoring on 10 minutes through what Howard described as an innocuous penalty, but overall he was pleased with the way his side withstood the opening blitz.

He said: ‘They started fast but we withstood it well, the penalty wasn’t really what we needed given everything, it was very soft, but we gained some confidence and started to match them as the game went on.’

Town came agonisingly close to going into the half-time break just a single goal behind, but the visitors doubled their lead just before the whistle to leave Town with an uphill task in the second half.

The home side got a goal through a penalty of their own right at the start of the second half to get it back to 2-1, striker Steve Sutton going clean through on goal before being brought down by the ‘keeper.

Again Howard felt aggrieved that no card was forthcoming, disagreeing with the referee who said it wasn’t a goal-scoring opportunity, despite the fact Sutton knocked the ball past him.

Dave Youldon converted the penalty, but then Tavistock scored almost immediately to restore their two-goal advantage and make it 3-1.

Sutton got on the scoresheet midway through the half to again bring Town back into the game against the table-toppers.

However, once more Tavistock answered with a strike of their own soon afterwards to re-establish their two-goal cushion.

The fifth arrived with just minutes left to give Tavistock a slightly flattering scoreline against the understrength Brid­gers, but with Howard being able to take plenty of positives if sadly no points from the encoun­ter.

He said: ‘They’re a good side, they’re not top of the league by accident, but I was pleased with our effort and performance, it should stand us in good stead.’